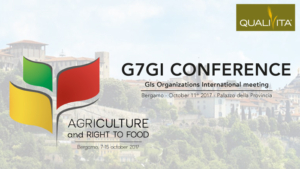 On the occasion of the G7 meeting of the Ministers of the Agricultural Policies (Agri-G7) that will be held on October 14th-15th 2017 in Bergamo, a side event – the “G7 – Geographical Indications Conference” – will also take place. Its main objective is to confirm the importance of the GIs sector within the international policy plan. Delegations of producers’ organizations of the G7 Countries are invited to have a seat at the meeting, to discuss in front of other invited delegations about important topics involving the GI products. Thanks to the presence at the Agri-G7 of international Ministers and decision makers in agricultural policy, as well as Members of the EU Parliament involved in promotion and protection of Geographical Indications, the GIs meeting will be an affirmation – in front of organizations, political representatives and international media gathered at Agri-G7 – of the economic, social and cultural values represented by the model of Appellations of origin.

The Ministerial Meeting Agriculture taking place in Bergamo on October 14th – 15th is one of the several meetings of the G7 Summit. The chief features of G7 are the intergovernmental nature of the preparatory process and its informality, which makes it easier for the leaders to discuss the world’s major issues and to rapidly devise and agree on solutions to them.

The main issues that the event is intended to deal with will be:

OBJECTIVES
The G7 of the Geographical Indications has the objective to achieve the realization and subscription of a political document shared by producers’ organizations who represent GIs in Countries adhering to the G7.The document will be exposed at the Agri- G7 to the Ministers of Agricultural Policies during planned reunions, it will be object of international media campaign through media following the delegations.

AUDIENCE
The G7 meeting of the Geographical Indications will have a qualified audience (by invitation only):

[/vc_tab][vc_tab title=”03.00 pm – 05.00 pm” tab_id=”1505140466181-2-10″]GIs Producers’ Organisations conference
Official presentation of the final political document signed by the participant GIs organizations during the GIs workshop to the institutions and press.

*CLOSED EVENT – BY INVITATION ONLY

We may request cookies to be set on your device. We use cookies to let us know when you visit our websites, how you interact with us, to enrich your user experience, and to customize your relationship with our website.

Click on the different category headings to find out more. You can also change some of your preferences. Note that blocking some types of cookies may impact your experience on our websites and the services we are able to offer.

These cookies are strictly necessary to provide you with services available through our website and to use some of its features.

Because these cookies are strictly necessary to deliver the website, refuseing them will have impact how our site functions. You always can block or delete cookies by changing your browser settings and force blocking all cookies on this website. But this will always prompt you to accept/refuse cookies when revisiting our site.

We fully respect if you want to refuse cookies but to avoid asking you again and again kindly allow us to store a cookie for that. You are free to opt out any time or opt in for other cookies to get a better experience. If you refuse cookies we will remove all set cookies in our domain.

We provide you with a list of stored cookies on your computer in our domain so you can check what we stored. Due to security reasons we are not able to show or modify cookies from other domains. You can check these in your browser security settings.

We also use different external services like Google Webfonts, Google Maps, and external Video providers. Since these providers may collect personal data like your IP address we allow you to block them here. Please be aware that this might heavily reduce the functionality and appearance of our site. Changes will take effect once you reload the page.